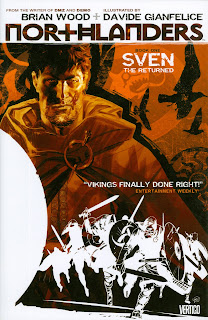 Here we I am back with this month's comic of choice, Northlanders, published by DC/Vertigo and created by writer Brian Wood. Northlanders is another one of DC's great Vertigo imprint, which lets creators make comics outside of the normal spectrum of capes and cowls and offers a unique take on darker more mature comic books. Northlanders was created by Brian Wood, an indy author and artist who decided to make a book about Nordic life and times, set during the Dark Ages. It is a book unique in that it doesn't star a particular character, but tells stories from many different points of view, each story arc being it's own thing, un-encumbered by previous stories. Each arc also has its own artist, as Wood revolves through a series of different illustrators to create unique artistic flavors in each arc.

Volume One of Northlanders, entitled Sven the Returned, is the perfect place to start. Wood teams with artist Davide Gianfelice to tell the story of Sven, a self-exiled Viking warrior serving in the Byzantine Army who returns home to the Orkney Isles to reclaim his heritage and birthright. Sven returns to the island to find that his uncle, Gorm, has been leading the people in his absence. Gorm has oppressed and taxed the people, even outright killing dissenters to keep his reign secure. Sven must best Gorm and his champion, while also defending the island against invading Saxons, in order to reclaim the throne. Along the way he meets a woman named Enna, who lives on the fringes of the Viking society. Enna and Sven must pit themselves against Gorm, but are forced to realize a bigger threat when the Saxons arrive.

While the first part of the story is a basic revenge tale, it does grow as the story unfolds over its eight issues. By the sixth and seventh issue, Sven has to come to grips with the truth of the futility of his actions, and Gorm must decide how his clinging to the old superstitions and legends he has lived his life on, can work in a changing world. Wood draws on the parallels of the old versus the new, and elevates the book over that of a typical Viking tale of carnage and violence. Don't get me wrong, that is in here. This is a book that provides some really great subtext while delving into the popular action and swordplay that you expect from a Viking tale.

Artist Gianfelice really compliments the book with his artistic style. He has a heavy, dark approach that helps to capture the context of being a Viking. It's a cold dirty world, inhabited by hard dirty men. Fighters and scrappers, people who live by the sword, and Gianfelice doesn't disappoint. He brings a real visceral quality to the series, dark and angry, bringing to life an unpleasant world and not pulling any punches. Another bit that I really like about the series is that despite different artists for each story arc, cover artist Massimo Carnevale really holds the series together. The cover of each issue is painted in painstaking detail by him and are really visual treats. They provide a sense of consistency and continuity, yet really add to the books overall feel.

I have never been a fan of Brian Wood's books before this. He was always a bit to indy for me, a lot of his work containing social messages that i thought outweighed whatever else the book was about. Here Wood finds that nice balance of fun and action with the underpinnings of a bigger story. By the end of the first trad, you genuinely want more Sven tales and to see where the story goes. I will say that the book does do a great job of mixing up the characters and tales being told. Using a system of 8 issue arc, followed by a two issue arc, followed by another 8 issue run, Wood creates very big stories, then offers you a nice break in between long forms before moving back in. It works in a sense that the book can still grow, but frames the stories in a manner that builds on the overall narrative.

Northlanders is a fun book. It brings all the things about great Viking tales hat you want, blood and lust, and fighting and all the great elements of a good warriors story. All the while still offering some deeper undertones to the arc. Wood has done his homework on the topic to boot, really trying to capture Norse life. Wood spent time in Scandinavia, taking pictures and visiting many of the places he uses in his stories, all in trying to better capture the feel the what the world was like around 1000AD.

This book provides all the action and violence you want from a comic. While the artistic quality may vary from volume to volume, you are always guaranteed a great story and some truly spectacular cover art. Volume 1, Sven the Returned, is a great gritty story of revenge and justice in a cold dark world. This is a comic for people looking to see the black underbelly of life in a tough and unforgiving world. This is a book not for the reader looking to stay outside the normal trend and find something new and different. Check out Brian Wood's Northlanders from DC/Vertigo, I checked it out on a recommendation, so should you.

End of Line.
Gerrad!
Posted by Gerrad McConnell at 9:50 PM