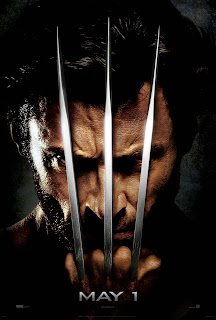 Yesterday I headed out to the theatre to catch the new Wolverine film. As a staunch comic book supporter, it's almost contractual that I see any comic book adaptation. To be honest though, I had some very serious concerns going into Wolverine. Concerns about the story, the actors, the characters involved, the director. Pretty much the only thing I was sold on was Hugh Jackman as Wolverine.

Thankfully, the creators actually managed o find a fun film inside of all the pomp and circumstance surrounding the movie. The movie starts by showing the origins of Wolverine, his birth and the discover of his bone claws after killing a man as a child who he believes has murdered his father, only to find that the man he killed is his father. Running away with his newly discovered brother, they realize that they can only count on each other. The two grow up and come into their mutant powers, healing factors that slow their age and claws, with almost animalistic senses. Traveling through the years it shows them fight in the great wars throughout history, from the Civil War to Vietnam, where they are drafted into a new team of operatives that also are powered like them, led by General William Stryker.

Stryker, played by Danny Huston, is the same villain from X2: X-Men United (played by an older Brian Cox then) has formed a team of operatives who would go onto become major players in the Weapon X program, there is Logan (Wolverine), Victor Creed (Sabretooth and Logan's brother) played by Liev Schriber. Wade Wilson (Deadpool) played by Ryan Reynolds, as well as John Wraith (Will I.Am) David North (Agent Zero/Maverick) portrayed by Daniel Henny. Also on the team is Fred Dukes (the Blob) by Kevin Durand and Chris Bradley (Bolt) by Dominic Monaghan. With so many character its very easy to get lost, but the film stays focused on Wolverine, who quits the team after a mission goes bad. His brother is nearly uncontrollable at this point in his rage and he doesn't like Stryker's increasingly brutal methods.

Retiring to the Canadian outback, he lives in peace for several years with his lover until Stryker shows up, claiming someone is hunting the old unit. Telling Stryker he wasn't interested, he changes his mind when he finds that Sabretooth has killed his lover. He agrees to a procedure that will bond indestructible adamantium to his bones, knowing that it is the only way to beat Victor. The Weapon X procedure is brutally painful but he overhears Stryker telling the doctor to wipe his memory, he breaks free and runs away.

Now he has to track down both Stryker and Creed, knowing that he has been lied to. Returning to his old ally John Wraith, he learns that Stryker is stockpiling mutant prisoners and running tests on them on an unknown island base. Tracking down the one man that escaped, Remy Lebeau (Gambit played by Taylor Kitsch) Wolverine goes to the base to confront his two greatest enemies in a final battle, one that also involves a confrontation with Weapon XI, Deadpool.

The movie is dense, packed with plot and set pieces and it doesn't rest on its laurels at any point. Honestly a few moments more on several scenes would have paid off, not only in terms of character development, but also allowing characters to develop more of an emotional bond with each character. Director Gavin Hood doesn't pull any punches and isn't afraid to kill someone off. He keeps the pace fast and frenetic. The one scene that I would have liked them to spend more time on was the whole Weapon X procedure itself. Such a great story in comic book form it lasts about 10 minutes in the film and honestly is one of the most important elements of the complex origin of the character. If it was up to me the film would have climaxed with his escape from the program and used that a basis for his battles against Sabretooth and the rest of the Weapon Team.

Still the ending itself is plenty action packed for everyone and is satisfactory. Hugh Jackman IS Wolverine and really grounds the movie in his performance. Sure there are some dialog chunks that are heavy handed or sappy and some of the action sequences could have been handled better, especially the fight between Wolverine and Weapon Zero in the helicopter but I can't complain.

There is a surplus of characters in the film and they could have cut a few out to make more screen time for the principals. The mutants that Stryker is experimenting on included a ton of cameos, from Emma Frost and Silver Fox to Cyclops. While I could have gotten along without that subplot, they don't really retract from the story and manage to create a continuity that isn't so unbelievable. I'd have loved a little more screen time for Liev Schriber whose Sabretooth was great. Terrifying and ferocious, he is quite the scene stealer. The inclusion of Gambit was kind of unnecessary as this now dates him to much for a possible appearance in future X-Men films and his role could have shed a little more screen time on one of the other members of Wolverine's team, particularly Dominic Monaghan's Bolt or Agent Zero. Don't waste Gambit on what essentially turns out to be a large cameo.


Wolverine is a fun popcorn film and a great way to spend a few hours at the movies. Honestly I hope they make a sequel and focus on the more intimate adventures Wolverine had in Japan following his Weapon X trials. Don't go in expecting Iron Man or The Dark Knight and you'll be fine. It was far better than the last X-Men film or the last Spider-Man. I recommend X-Men Origins: Wolverine, go check it out.
Posted by Gerrad McConnell at 6:34 PM