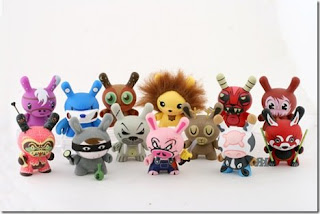 Wanted to drop a few quick notes on the latest goings on in the world of vinyl and urban toys. Kid Robot, makers of the Dunny line of vinyl toys, released a new series of figures this past week. They are a very limited edition run of figures all in a theme. Kid Robot usually does a regular series run (numerical), and then a theme run. Some of the themes in the past have been Los Angles (with all LA based artists), Azteca (Hispanic artists), and the last theme was the United Kingdoms, with all artists being from Britain. For this run Kid Robot used a much smaller production scale, making these figures much harder to get and more limited. They tied this limited availability with the theme, Endangered. Each Dunny is modeled after an endangered animal, some modeled after even fictitious ones.

Overall my personal opinion of this set marks it as one of my lesser favorites. There were still a few nice figures in the lot and between Jason and myself we got all but about one we really wanted. To my knowledge there were 16 figures in the run, including the two chases and a color variant. We managed to score the color variant but not the two chases or the more limited 1/40 figures. Still we managed a nice haul to hold over the old addiction until Comic Con.

I also managed this week to finish my Gamma Mutant Space Friends line from Kid Robot after Jason scored an Ion figure off the Kid Robot message boards for me. That means I have the full set of 14 figures, including the limited 1 in 80 Stella (seahorse) and both color way variants.

I hope to post up in the next week or so my own attempts at creating some vinyl art. I bought a couple of blank Mini-Munny's and have been working on painting and designing them. With the second one I am actually photographing my progress. Be on the lookout for finished product next month.

I'll be back tomorrow with my review for Terminator Salvation. Until then, thanks for reading!

End of Line.
Gerrad!
Posted by Gerrad McConnell at 5:21 PM

Email ThisBlogThis!Share to TwitterShare to FacebookShare to Pinterest
Labels: Di-Vinyl