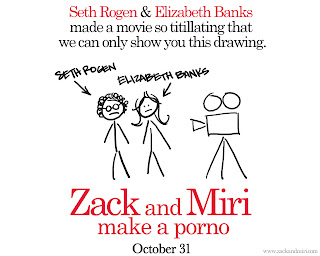 I have been meaning to post on this film for almost a week, having caught it in a sneak preview screening last Tuesday. Part of the delay was to allow my roommate to watch the film on his own, with no preconceived notions from my review.

The plot is very simple. Two friends who have never seen each other as a romantic option, find that sex can change everything. This simple message is hidden within director Kevin Smith's usual array of crude humor. Crude humor I happen to like a lot. By masking his message of love and romance around a package of porn stars and sex jokes, he actually tells a very nice story. I thought this was an important film for Smith, who has struggled to find success in films outside of his Jay and Silent bob films. He creates a good balance, carrying over some trappings from his earlier works in actors Jason Mewes and Jeff Anderson, but creates a new dynamic with Rogan and Banks. Its the Kevin Smith humor you want, and a story to carry it.

Don't get me wrong, there is some serious boundary pushing in the film. It is very easy to see how it scored an NC-17 rating initially, for language alone. Don't let that deter you, Rogan is great in this film, I found his character far more redeeming and likable than the one in Knocked Up. Hopefully this will be the movie to launch Elizabeth Banks as well. I have been waiting for her to bust out (so to speak) since her turn in The 40 Year Old Virgin and here she carries her weight. Jason Mewes also has a good role as a whacked out porn star, coining a new phrase that I found particularly funny, the dutch rudder. (You will have to watch the film to get that definition!)

I don't have any complaints about this film to be honest. Smith's directorial vision continues to grow as his films grow in scale, hopefully he can continue to show a maturation as a film maker, despite whatever topics he covers. I think he can ride that line better than other directors, balancing the perverse with the sentiment and not fall to far on either path. I can honestly say that in terms of content and direction, this is Kevin Smith's best film since Chasing Amy, and perhaps his best work period. I like to see him expand his horizons. It is easily my favorite comedy of the year, beating Step Brothers out. You should check it out. Seth Rogan and Elizabeth Banks in Kevin Smith's Zack and Miri Make a Porno.
Posted by Gerrad McConnell at 7:59 PM