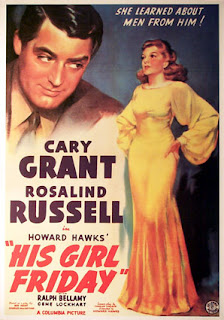 In this month's edition of the rewind, I wanted to go back to a comedy. I've highlighted two of my favorite comedian (teams) in Buster Keaton and the Marx Bros., so I thought it fitting to head back to the well once more with Cary Grant. Grant was the first actor who could really do every genre of film. Stars like Gary Cooper, Clark Gable, and Errol Flynn were primarily action adventure or dramatic actors. Even James Cagney, probably the most diverse actor of the 1930's was mostly known for his tough guy gangster roles. Grant broke in with comedy, with his background in Vaudeville and theatre to give him the time and pacing he would use so well throughout his career.

Grant was the first big budget actor not afraid to poke fun at his image, because even Grant new that his Cary Grant persona was an image. The truth is though that Grant owed a great deal to the director of this month's film, Howard Hawks. Grant made three films in 1939, of which I highlighted in my spotlight on 1939 several months ago. Gunga Din (an action epic) In Name Only (a drama) and Hawks action adventure Only Angels Have Wings. By 1940, Hawks knew only one actor capable of handling his new comedy, Cary Grant. Together they made one of Grant's top 5 films in His Girl Friday.

First off, let's highlight Howard Hawks. The 1930's, 40's and into the 50's were punctuated by many great directors. John Huston, John Ford, Billy Wilder, Hitchcock, but all those directors were known for primarily one genre. Hawks was a master of every type of film, whether action, comedy, gangster or pirate, western or musical, he did it all. To name just a few, Red River, el Dorado, Hatari! (all with John Wayne) Bringing Up Baby (with Grant and Katherine Hepburn) Gentlemen Prefer Blondes and Monkey Business (with Marilyn Monroe) Scarface with Cagney and The Big Sleep with Bogart and Bacall. This guy did it all and made a lot of really great films.

But I digress, back to His Girl Friday. The basic story is that a newspaper editor (Grant) runs into his ex-wife and ex-star reporter the day before she is to be re-married. He then spends the rest of the film trying to woo her back into the life they once shared, but she claims to want a life as a real woman and not a newspaper woman. During the film, which takes place over the course of a single day, they also get embroiled in the plot of a wrongfully accused murder, and the two attempt to clear the charges of the accused before its to late.

The film was based on a played call The Front Page, but after a reading Hawks bought the rights from eccentric filmmaker and aviator Howard Hughes, recasting the second lead as a lady. The film has almost no score, just in the first minute and in the last 2 minutes, using it's dialog and the actors to create the real life environment.

This is also the first film to feature overlapping dialog, where each actor speaks over the others lines. Before this, one actor would finish their line, then the other would read theirs. With His Girl Friday, the attempt was to make the speech seem like real people were talking, and it cultivates in a whip fast delivery from the actors. Grant co-stars with Rosalind Russell, on loan to Warner Bros. from MGM. Russell nails the dialog ans spitfire nature of the fiery reporter. Grant is at his usual best playing the suave and funny editor, and the two have great chemistry. Aided in no small part to the large amount of improvisation the two brought to the roles. Hawks allowed the actors great leeway in creating their character and it pays off. Russell even hired personal script writers to help her in her improv and give her more clever ad-libs to keep Grant on his toes.

Honestly, this is just a great film. This is Cary Grant's best comedy, and next to perhaps North By Northwest, my favorite Grant film (though To Catch a Thief and Charade are just as close to perfection) I promise that you will not be disappointed. From Warner Bros studios, with director Howard Hawks and stars Cary Grant and Rosalind Russell, 1940's His Girl Friday.

End of Line.
Gerrad!
Posted by Gerrad McConnell at 12:20 AM