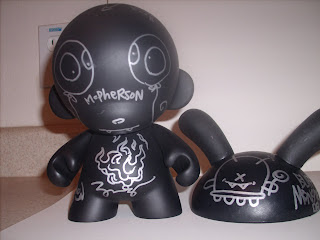 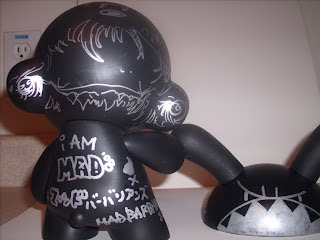 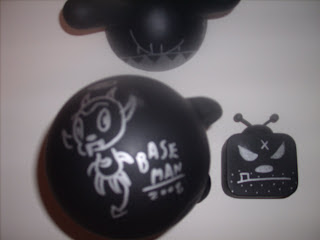 Comic Con 2008 has come to pass and we are all safely home now. Sunday was a perfect end to the con.

I spent about 2 hours passing out fliers for Matt and Jason's new book, Harry Walton: Henchman for Hire that will be dropping from Image later this year. It was great to be able to do my small part in helping out my friend and anything that I can contribute to means just as much to me as it does to them. I feel like their success in some small way is also my success. You can't help but be emotionally invested in a person's success after over 18 years of friendship. Especially when it means that much to the other person.

I also managed to do a few things for myself, meeting artist Frank Kozik and having him do some work for my DIY Munny. It is awesome! I'll be posting some pictures from Comic Con over the next week or so with some cool captions. Staring with some pics of my DIY!

I did think that I would highlight the top 5 things i got out of Comic Con this year.

1- Wacthing Jason do a signing for a real published book. I was both a sense of honor and awe that someone I knew helped to create something that has been a part of my life for so long. Every comic book fan dreams of one day making a book, I watching him do that allowed me a small glimpse into something that I thought I'd never know.

2- Meeting Jason's friend Will. He was just super nice and fun guy to hang out with. It's not that often you meet a really cool and genuine guy that you can call a friend after such a short time.

3- Pulling in all that sweet vinyl. Between the DIY Munny from so many of my favorite creators and getting to talk to them, it was just cool. To top it off knowing that regular Kid Robot contributor Attaboy is designing my own person Mini Munny is just to surreal. I posted some pics of my DIY up top.

4- Getting not one but two awesome Dazzler sketches. Matt and Jason drew one up for me that I am proudly keeping near my workstation. As well as one of my favorite comic artists, Phil Noto, who sketched out one for me on Bristol board. That was just the icing on the cake.

5- The announcement that they are making and have footage of Tron 2. I love Tron and the fact that 2009 will see a theatrical sequel fills me with more excitement than the impending Lord of the Ring prequels and Harry Potter sequels combined. And I love those 2 franchises. Please God, don't let this be bad.

Anyway that was the big hit out of Comic Con 2008. Check back in over the next few days for more updates, including flash fiction, my rewind pick, and a possible poem. Thanks for reading guys.

End of Line.
Gerrad!
Posted by Gerrad McConnell at 10:01 PM

Anonymous said...
This comment has been removed by a blog administrator.
10:42 PM

Anonymous said...
This comment has been removed by a blog administrator.
10:43 PM

Anonymous said...
This comment has been removed by a blog administrator.
10:43 PM

Anonymous said...
This comment has been removed by a blog administrator.
10:46 PM