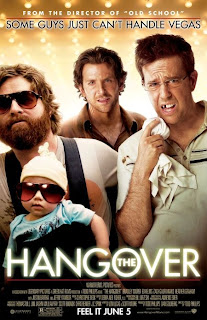 Headed out this morning to watch The Hangover, the new comedy by Todd Phillips (of Old School fame) starring Bradley Cooper, Ed Helms, and Zach Galifianakis. I have to say that I enjoyed this movie a lot more than I thought i would. It was a comedy that didn't blow all of the humor in the trailer for the trailer for the film like so many comedies, it saved some for the actual picture.

It starts off with four friends heading to Las Vegas two days before one of them is about to get married to celebrate the groom, Doug (Justin Bartha) bachelor party. His friends, Phil (Cooper), Stu (Helms), and Alan (Galifianakis) grab a suite at Cesar's Palace and prepare for the greatest night of their lives. They start by celebrating with a shot from the roof of their hotel overlooking all of Las Vegas. The picture then flashes forward to the next morning, with Phil, Stu , and Alan waking up with the worst hangover they have ever had and discovering that Doug is missing.

The boys must retrace their steps from the clues in their pockets to find their friend in time to get him to his wedding. From a tiger in they find in the bathroom to a baby left behind in the room, they must put the pieces back together to find out what happened to Doug, but also what happened to their memory. I don't want to ruin the film but based on the previews you discover along the way they meet Mike Tyson, Stu gets married, and the boys generally get the crap beat out of them. From strippers, to hospitals, to owing some bad men large sums of money, the boys realize that the greatest night of their life has turned out to be the biggest mistake they have ever made. In the end though, the movie is about the bonds that friends share, and the importance of learning who you can depend on.

The casting of the movie was great. Cooper is a star in the making with definite leading man potential that I hope more studio bosses notice and get him cast. Ed Helms deadpan delivery is great, from his time on The Daily Show to his current gig on the Office, Helms is perfect as the put upon boyfriend who doesn't know how sad his life is. Galifianakis plays the role of idiot savant to a tee, bringing in the dark horse factor to the humor and really rounding out the cast. A minor role for Heather Graham is nothing of note, but Tyson delivers some laughs with his take on Phil Collins.

The comedy itself finds a nice balance between over the top gross out humor and the great physical comedy of Helms and Galifianakis. The way they throw themselves into the role they really sell the beaten down and "hungover" aspect really well. Another thing I especially enjoyed was the bachelor party pictures they ran over the credits, they are just as funny as the whole movie.

The only downside is the story really. While being very funny, some of the elements are a bit of a re-tread of other comedies. Galifianakis and Helms are very similar to the kind of shtick that Will Ferrell and Steve Carrell have respectively, and the movie does play like it is aimed at re-capturing that. Even some of the plot elements, like the Vegas wedding angle, come from other familiar sources (the Simpsons anyone?). Still the film manages to turn itself around from that based on the performances of its three leads, who channel enough of the spirit of the films intent to keep it funny and enjoyable throughout.

Overall I enjoyed the film a lot and I definitely think that it is worth your movie dollar. It has plenty of laughs and the story keeps moving, from one crazy plot point to the next, all in a manner that makes you really grow to like and root for these guys to win. Check it out, The Hangover, by director Todd Phillips and starring Bradley Cooper, Ed Helms, and Zach Galifianakis, its worth it.

I loved it! I agree the story was meh but you really came to love the characters. Such terrific acting. Also some of the random elements that came out towards the end (the guy in the trunk) really sold the odd-ball edge of the movie. Galafanakis (sp?) was so awesome. I thought I was gonna hate his character at first but by the end his had turned into a very endearing role. Definitely worth the money.