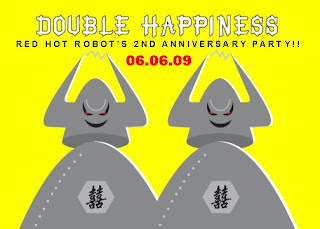 A bit of a different post but last night I attended Red Hot Robots 2nd Anniversary Party. Red Hot is the primary source for urban and vinyl art and toys in the Valley and the shop I hit whenever a new piece or toy or urban themed art is going to drop. Last year at the 1 year party the owner, Jason, had a great party planned. There was live music and raffles for prizes, with an assortment of cool and strange snacks, candy, and beers.

This year was more of an Asian theme, with Asian themed beers, including a brand called Tiger beer that I had never had before. I had two. There was a bunch of strange Japanese candy and the DJ was spinning all sorts of music, some off of a CD created specifically for the Red Hot Robot 2 year Anniversary. There was a ring toss game where you could win prizes, including one of 2 grand prizes! I Managed to win a bag of candy and some Silly Putty, which I gave to one of the children that came to the show later that night when they had run out of prizes.

All in all I had a really fun time. My room mate Jason (not the owner) won one of the raffles and got a bag of assorted vinyl toys which was cool, and since no one won the grand prizes at the ring toss, they were raffled off at the end of the night. Autumn won one of those as the very last ticket called. Inside was a limited edition T shirt and a $35 gift card. Truthfully a very sweet prize.

The night was a huge success for the owner, nearly everyone bought a good amount of swag, including me who didn't even need anything. The New Times, sort of the local street scene paper, was there taking pictures for an article in the upcoming edition and took shots of us, so we may even be in the paper. One of the things I like about the owner is that he really goes all out for any parties at his store. He always has a great selection of drinks and wonderfully unique snacks and he always creates great gift bags for random winners. We have been lucky enough to win a couple of times at the different parties he throws, whether it be a trading party for the launch of a new toy line, or an Anniversary Party like last night.

Overall we had a blast and it's just a bonus that the owner is such a genuinely nice guy. Thanks for reading guys!

End of Line.
Gerrad!
Posted by Gerrad McConnell at 12:11 PM

Email ThisBlogThis!Share to TwitterShare to FacebookShare to Pinterest
Labels: Di-Vinyl