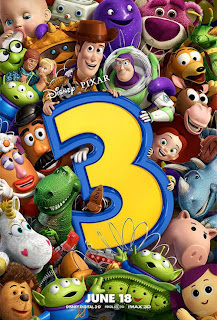 I had a great opportunity opening day to catch an early matinee of Pixar’s Toy Story 3 with my newest movie going companion, my niece Lexy. At 5 years old she is quickly becoming a movie buff and she really enjoys going to see movies on the “big screen” as she says. Needless to say this is a boon for me because it gives me a valid excuse to catch many of these animated films that I would normally not go to. Well, I’ll be honest, I would see the Pixar ones, but all the rest are iffy. Still Toy Story 3 may have been her favorite film yet that we have seen together and I will be the first one to admit, Pixar Films may be the best movie production company making films today.

Toy Story 3 is a sequel 11 years in the making, focusing on the continuing adventures of a group of toys led by Woody the Cowboy, voiced by Tom Hanks, and Buzz Lightyear, a Space Ranger voiced by Tim Allen. They are accompanied by a series of other toys like Jesse the Cowgirl (Joan Cusack) Rex the Dinosaur (Wallace Shaw) Hamm the Piggy bank (voiced by Pixar perennial John Ratzeberger) Mr. Potato Head 9Don Rickles) and several others. Just like in real life, 11 years have passed for the toys as well, and their owner Andy has grown up and is on the verge of entering college. The toys have not been played with for a long time and are now worried that they will be either relegated to the attic or thrown out when Andy moved out.

Woody stays true to Andy, believing that they will be sent to the attic and one day played with again but the rest belive that they will be thrown out. When Andy finally gets ready to leave, he bags them all except Woody (who he intends to take to college, presumably nostalgically) with the intention of storing them in the attic. They accidentally get mixed into the trash though and conspire to escape by sneaking into a donation box headed for the local daycare. Woody follows them, trying to convince them that Andy didn’t want to throw them away, but they believe that greener pastures lie at the day care.

When they get there they are greeted by a phalanx of new toys, led by Lotsa, a strawberry scented plush bear voiced by Ned Beatty and Ken (of Barbie fame) voiced by Michael Keaton. Lotsa has a southern twang and seems very approachable at first. Ken is vain and narcissistic, living in his own dream house with a huge wardrobe. The toys believe they have found paradise, a Mecca where they will never get old or thrown out as new kids always come to play. Woody tries to convince them otherwise, but when they decide to stay, he leaves, intending to return to Andy. He is waylaid during his escape however and rescued by Bonnie, a young girl who’s mother works at the Daycare. While with Bonnie, he learns from her toys what the rest of his friends come to find out. Sunnyside Daycare is no Mecca for toys, its more of a prison, where certain toys get preferential treatment and others are abused. Woody returns to help his friends escape and get back to Andy before he leaves for college, but they quickly learn that Lotsa has no intention of letting that happen.

Once again, Pixar has created a great movie and is already my choice for film of the year. The film is a wonderful blend of humor, action, and pathos. Honestly, the action sequences in this Toy Story are the greatest to date, with the film climaxing at a huge waste management plant. The action is frantic and wide screen. Even the beginning Wild West play scene is bigger than any Toy Story action sequence we’ve seen. It ingeniously blends all the toys in multiple settings in such a way that it becomes both thrilling and immediately charming. It also has the taunt thrills of a classic escape movie, fueling elements of great noir prison films the likes of James Cagney use to be involved with.

Toy Story 3 also continues the culmination of Pixar films really finding a deeply soulful resonance in its movie going audience. While I didn’t get quite as choked up as I did during Up (I cried twice) or Wall-E (I teared up once) I definitely got choked up in the last 20 minutes of the film. The film morphs so seamlessly from genre to genre, that by the time you get to this very pivotal coming of age moment for these toys, it really hits you with a deep impact. As each toy faces an unknown future, as Andy himself faces his past, you really feel empathy for these characters. It’s a story that has grown with its audience, and while younger viewers may not pick up on the significance of the moment, you sure do later.

Honestly, I have nothing negative whatsoever to say about this film. Even in Up, which I think is a more emotionally impactful film, I found slight flaws that didn’t work for me. In Toy Story 3 I can’t find any. Visually the film is flawless. Pixar is the gold standard for computer animation and this film is certainly no exceptions. The 2 actions scenes that I mentioned are shot with such scope and detail, that its hard to imagine them looking any better. Even down to the wear and tear on some of the toys, no detail escapes the animators vision. I was especially impressed with small details like Lotsa’s white fur spots being slightly soiled from years of use and the wear and tear on Tag Along Telephone (whose voice work alone made me realize how much I’d love this film, voiced as a quick talking 1930’s prison thug)

The story elements are perfect as well. For a film that straddles so many different genres,. it does so flawlessly. Each character is perfectly rendered and unique, from Woody’s faithful yet slightly acerbic cowboy to Buzz’s machismo laden heroics. Wallace Shaw’s voice work as Rex is always welcome, giving the dinosaur a “mouse that roars” quality. Even the new characters blend in flawlessly. You can actually here Michael Keaton having a blast with the role as the hilariously out-dated and vain Ken. Tom Hanks voice characterization as Woody really grounds the film in believability and gives the audience a great anchoring point in the film. I also thought the sequence where Buzz is reset to Spanish was highly amusing as well. From cocksure tough guy, he turns into a sort of Spanish lothario that adds some much needed humor during a particularly tense action section of the film. I also want to give Ned Beatty props, voicing Lotsa as a gentlemanly southerner, but with the twist of a few words and inflections, gives his huggable bear persona a level of intimidation.

All in all, Toy Story 3 is a triumph of a film. Fun, funny, and poignant it continues to show why Pixar Studios is maybe the best group of film makers in motion pictures today. The film has something for all ages and will be just as good a film at age 6 or 60. In a season of slumping cinema and lackluster films, Toy Story 3 is the first film to live up to its much lauded hype. I personally think that the deal Walt Disney Studios made to incorporate Pixar was both bold and smart. Pixar President John Lassiter knows quality films and I can’t wait to see what they have got coming up next. In the meantime, check out Toy Story 3. It’s a powerful film that delivers on every level. I simply loved it.

End of Line.
Gerrad
Posted by Gerrad McConnell at 3:03 PM