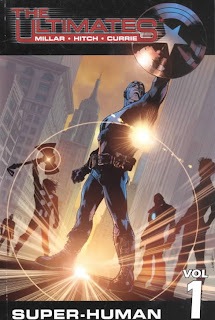 I missed last month's installment of this column due to my poor work ethic and shoddy posting efforts. To compensate I am going to attempt to post this column twice this month, one for September, one for October. First off, let's take a look at September's comic book of choice, a return to more mainstream superhero fare with Mark Millar and Bryan Hitch's Ultimates. Originally published in 2002 under Marvel's Ultimate banner, this series was a modern day re-imagining of the core super hero book, The Avengers. The Ultimate line was first introduced in 2000 as a means to create fresh and modern uptakes on many of Marvel's pre-existing properties. This would allow readers a brand new universe to explore with contemporary takes on their favorite super heroes without the nearly 40 years of continuity baggage many of them. it was a great plan for Marvel, you didn't alienate any of the readers who grew up on Spiderman (who by now is in his late 20's and married) for you still had that book, but here you could go back to telling stories of a teenage Spiderman in high school to attract in a whole new set of readers. A lot of this concept I covered in my review of Ultimate Spiderman in an earlier column.

With the Avengers Mark Millar and Bryan Hitch breathes a completely new life into the series. Calling them the Ultimates, the duo changed the status qua of the Marvel universe with completely original takes on well worn and established characters. The story is set right in 2002, a time where America is looking for protection against enemies abroad and for anyone to safe guard American soil. Enter Colonel Nick Fury, Agent of Shield, who is charged with creating a super human task force to protect us from threats. Fury is the first remastered character we meet. In the original universe Nick Fury is commander of Shield (a global peace keeping agency) and a WW2 veteran. In this version he is now an African America (who look is based on Samuel L. Jackson) and the epitome of cool. Teaming up with a pair of scientists, Dr. Bruce Banner who is working on a variant of the Super Soldier serum that created Captain America in the 40's, and Dr. Hank Pym, who has developed a formula that allows you to grow to giant proportions, or shrink to insect like size. Each scientist is based in insecurity, Banner a sniveling weakling no one likes who turns into the Hulk after testing a failed version of his own formula and Pym a deeply insecure man who takes his aggressions out on his wife, Janet. She is the next member of the team, maybe the most unchanged of all versions of the characters, as The Wasp, able to shrink her size and shoot energy blasts, though in this version she is Asian.

He also recruits several big guns. Billionaire industrialist Tony Stark as Iron Man, a hard drinking womanizer who joins because he is dying and wants to make up for some of his life's choices, but mostly for the party and the ladies involved. Thor is the next member a self proclaimed god with the abilities to control lightning and possessed of incredible strength and endurance. He also is either a messiah or a lunatic, depending on if you believe his tale. He also represents the left wing majority in the group, joining the team solely to spread his message of peace and tolerance. The final member and the key to the teams success is their field leader, Captain America himself. His origin is the same, fighting Nazi troops in Germany during WW2 using abilities gained from a special serum, then getting caught in an explosion that caused him to be frozen in a block of ice for nearly 60 years. This Cap is very much a soldier and a member of "the Greatest Generation," not afraid to take a life and epitomizing the attitude of never say die.

The story is simple, Fury recruits Banner and Pym to help develop a new Super soldier for the American government. Pym focuses on his Giant Man and Ant Man soldiers, while Banner tries desperately to re-create the formula that created Captain America. Fury tries to recruit Thor, who wants nothing to do with the teams right wing agenda, but manages to convince Stark to join as Iron Man. Luckily there is a break for Fury when Captain America is found frozen in a block of ice in the arctic. After thawing him out and getting Cap through the culture shock, he agrees to lead the team, and just in time to face their first threat, a rampaging out of control Bruce Banner who has become the Hulk.

The series was pitched as a finite series, 13 issues, and is collected in two trades, volume 1 Super Human (which tells this story) and volume 2 Homeland Security which features the teams battle against an alien race of shape shifters. It's had 3 volumes so far, but the first trade is where its at. Millar breaths a new life into characters that have been around forever. Ultimate Captain America is truly a man who never says die and can't quit. He isn't afraid of anything and leads the charge for whatever the mission may be. He is maybe one of the most engaging characters in comics. Tony Starks womanizing alcoholic is great foil to Cap and provides a much needed breath of comic timing and fun to the series. Millar also captures very different character dynamics in each member of the Ultimates, really encompassing the entire team aspect of the book, never letting one character become to much the focus of attention.

The same can be said of Bryan Hitch's pencils. This is another book that really embraced the burgeoning wide screen action feel of comics. Hitch's ultra detailed art blows up on the page, using giant spread shots and bombastic hyper reality images to create a sense that the book is bigger and the effects are larger than other comics. Hitch is truly a penciler without peer in comics and Ultimates is his best work to date. He creates viable and realized looks for established icons that are both contemporary and classic, immediately recognizable but with enough of a twist to keep the characters modern and fresh.

Ultimates was a book plagued with publishing delays, taking nearly two years to complete its first 13 issue arc. The delays were on both the artist and the writer, Hitch's detailed pencils taking longer than normal comic production, Millar's story and plot lines evolving to meet the changing climates of political climates. Strangely, such was the demand for issues that the delay did nothing to decrease demand for the title, rocking it to Marvel's number one book during the months it shipped and adding some much welcomed star power to the Ultimate line, whose launched only with Ultimate Spiderman and Ultimate X-Men.

Ultimates still remains the yardstick for wide screen action books. What set it apart was the storyline, delving into the political policy of America and the hazards of having a super powered response team. It's really one of the few super hero books I have reviewed in the column, a look at the potential of super hero comics and what realms of possibility can be explored. Millar is a very controversial writer, often pushing the envelopes on projects like Wanted (which I reviewed here) and Chosen (his riff on Jesus and religion) but here he attempts to peel back the veil of public perception and dive, almost with glee, into big screen big budget super heroics, while still tending the fine line of a measured and entertaining tale.

If you are looking for the summer blockbuster of comics, look no further than Mark Millar and Bryan Hitch's Ultimates: Volume 1: Super Human, for a great read and a great adventure.