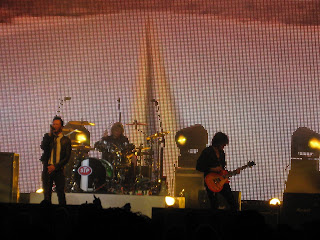 Singing "Big Empty" - the whole crowd was into this song.... 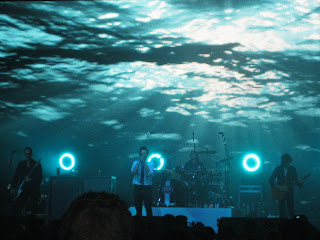 "Interstate Love Song"- The jacket was off, it was time to rock... 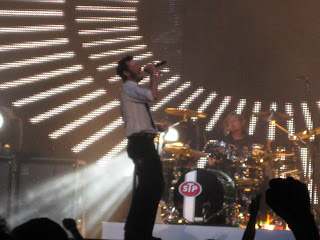 The last song of the night, 'Trippin' on a Hole in a Paper Heart"

Sunday was my birthday and I have been trying to stay ahead on my blog this month, writing entries and columns in advance, which is why this Concert Time and tomorrows entries are coming a bit after the fact. Sunday we went to the Arizona State Fair (which I'll detail tomorrow) but afterwards we went to Stone Temple Pilots at the Fairgrounds as the capper to my birthday. I have never seen STP in concert and honestly, I have always liked their music but they were a band that kind of flew under my radar. Seeing them in concert reminded me of the fact that they actually have a lot of really good songs.

While I hit the Fair itself with Jason and Autumn, Steph met us down there about 6:30to see the show with me. She was suffering from some pretty bad allergies and was defiantly feeling poorly but she toughed it out and came, not only for STP but for me, so that was nice. After a little snafu where I lost the tickets, we got in and got to our seats. They were decent seats on the floor, next to the mixing station on the aisle. I hadn't tried to snake the BEST seats, just something nice and close without paying an arm and a leg. We had a very good view of the stage.

There was no opening act so just after 7:00, STP took the stage and started rocking. They had a really good set list prepped, hitting all of the great songs, from "Interstate Love Song" to "Creep", "Vaseline", and the seminal "Plush". They played my favorite song, "Big Empty" off of the Crow soundtrack (which I was addicted to back in high school). That was my favorite song of the night, to hear the whole stadium singing along to the lyrics was great, and the crowd did a great job staying into the show. They made sure to hit just about every song I could think of, including "Wicked Garden" and a great hard rocking version of "Down". They closed the show with a scorching rendition of "Trippin' On a Hole in a Paper Heart" which the whole crowd really got into. I think maybe the neatest thing was the song they did right before that to lead off their encore, "Dead and Bloated", which wasn't one of their biggest hits, but was defiantly one of Steph's favorite songs. Lyrically it talks about your birthday deathbed, so in a way it was kind of like getting a happy birthday from STP, though maybe a little light on the happy part and a little heavier on the morbid part. Still a nice surprise song choice from them during a really great show.

The setup for the concert was a little plain, with a giant screen behind them that flashed through different video images, from scenes of Mad Max to trippy acid kaleidoscopes meant to work in conjuncture with the music. They didn't talk to much between songs, just pausing slightly between each song. Though sometimes lead singer Scott Weilan would announce the next song they would play. Still, they made up for the stage presence by really turning it on during the actual song itself. I remember really getting involved in the music during their rendition of "Sour Girl" and "Sex Type Thing".

During the concert I remembered thinking that they had played all of their greatest hits, that there was only one song that I couldn't think that they had played, but then as I was double checking song titles for this post, I realized that STP has a far greater library of songs than I remembered. Songs like "Big Bang Baby" and "Lady Picture Show". STP had a far more musical impact than I had remembered.

STP didn't have an opening act, so they came out and did the show and played a solid hour and 45 minutes, very respectable. I think the strangest moment was when Steph realized that seeing STP made her feel old. That potentially she could be bring her children (if she had them at 19 or 20 like so many people do) to the show. She goes to a lot of concerts, more than I do at any rate, but she goes to see bands she has seen before. This was the first time for both of us at STP and it kind of made her realize that these songs were 16 or 17 years old. They had came out while we were in high school. It was certainly a surreal realization, turning 33 meant that I had known Steph for 15 years. Kind of strange to reflect on that in the end.

Still it was the perfect way to end my birthday (and the second year in a row I did so with a concert!) I was glad to be able to share it with friends and the people that mean so much to me. I don't have a lot of concerts on the horizons so who knows what the next show is going to be, but I am glad that I got my thoughts down on how much fun I had at this one when I did. Tomorrow will be a bit of Food for Thought as I relate my experience at the Fair, and enjoy a few pictures from the concert up top. With the camera I got for Comic Con, I am going to try and capture a few photos at each show I go to, mostly for posterity on my part. Thanks for reading!