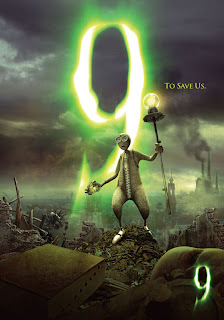 Headed out to the theatre to catch the new animated film 9, by producer Tim Burton and director/ writer Shane Acker. 9 features voice work by many great talents, including Elijah Wood as 9 himself, and the likes of Jennifer Connolly, John C. Reilly, Crispin Glover, Christopher Plummer, and Martin Landau. Designed as very much as an animated movie that could appeal to audience of all ages, it has a decidedly darker tone than most animated films, almost to the point that it it a film targeted for older audiences.

9 is a bout a series of sentient rag dolls, numbered hence the name, who are struggling to survive in a post apocalyptic world terrorized by the beast, a sentient steam punk sort of creature. The film starts off with the awakening of 9 (Wood) in a laboratory of sorts, unable to speak. After discovering the other members of the group, sentient rag dolls like himself, he and 5 (Reilly) set off to save 2 (Landau) who has been captured by the beast. Along the way they find other members of the group lost over the years, warrior 7 (Connolly) and 3 and 4, the silent catalogers. During the rescue attempt though 9 re-activates the great machine, the one responsible for starting the end of the world, and the battle between man and machine that destroyed so much. It's up to 9 and his friends to stop the machine, before it destroys them too. Along the way you also learn about how these dolls came to life, and what it means to be human, even if you aren't one yourself.

There are good and bad qualities to this film. Let's start off with the good. The animation is top notch, they really craft a very dark and dystopian world full of wonderful scenic elements and design. Especially character design. Each doll is a unique in its own way and really dynamic in their expressions. The robot and beast designs are even more incredible. They manage to capture a very steam punk meets horror feel without being to over the top. The beast and the Great Machine are wonderfully designed. From an animation stand point alone this film is remarkable. Easily the best non Pixar film in terms of quality animation.

The voice acting is also great. Wood plays the optimistic hero well, bringing his own sense of quiet confidence to the role, as the hero who does what needs to be done, something he has a track record with. Reilly brings a wonderful sense of light comedic timing and support as the sidekick role. Connolly is a great choice to play the tough as nails warrior woman, who underneath the shell is more vulnerable than you would think. Plummer as 1, the cowardly fearful leader, plays a role he knows well, the manipulator and schemer, a part he has played so often in the past. Even Landau brings a wonderful optimism to his role as 2, as the aging sage who sees the possibility in hope. Last, but not least, Crispin Glover is the guy to cast when you want a character to be slightly off his rocker and creepy as the artistic seer. He brings a dread, and levity to the role that only he could pull off.

The bad part of the film though is the story though. You can really tell that the film is based on the Oscar nominated short from a few years back. It seems to me that Acker was desperately trying to flesh out the story to make it long enough for a feature length run. The fight sequences, except for the one with the beast, seemed a bit shoe horned in as opposed to natural parts of the film. What killed me though was that the author had great material for the story in the plot itself. If he had spent more time on what had caused the schism between the dolls, where some stayed at the sanctuary and some left the group, or fleshed out the surrounding characters like they did with 9, you would have had a much tighter film and stronger story arc. While you do get flashes from the beginning of the war and the rest of the dolls finding each other, you never really get into how they awoke, or what motivates each in their role. While some of the dolls are a bit more tertiary, like 3 and 4 and even 6 and 8, the rest are strong characters who could have used the screen time.

Overall 9 hedges a bit on the disappointing side for me. I felt that with all the buildup and pomp, they fell a bit short in the plot category. That's okay though, I saw a lot of potential and I have hopes that further films from Acker can be stronger. The animation was spot on and that is definitely something to start on. All in all, skip 9 this week and wait for it on video. Thanks for reading!

End of Line.
Gerrad!
Posted by Gerrad McConnell at 11:50 AM