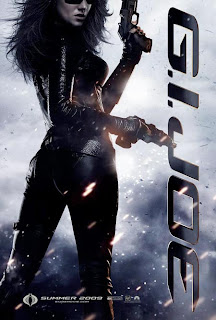 Caught GI Joe last week, though I am just getting around to posting my thoughts on the experience today. To be honest, it wasn't as bad as I thought. I mean it was still horrible, but it wasn't the bottomless pit of suck I more or less expected. GI Joe stars Channing Tatum, Marlon Wayans, Ray Park, Sienna Miller, and Dennis Quaid in more or less a huge spectacle of a film that favors style or substance any day. Not that you really expect anything less from director Stephen Sommers, of the Mummy franchise and Van Helsing fame. He is a director that often delivers high octane, high budget set pieces, usually with a minimal plot thread together to make the film find a semblance of life.

Tatum plays Duke, a military soldier, who along with his best friend Ripcord (Wayans) are ordered to protect a special military shipment of weaponry from being stolen. Unbeknownst to them the creator of the weapon is Destro, an agent of the burgeoning Cobra terrorist organization. Having using NATO money to build and design the rockets, they use nano technology to destroy metals and construction materials unless deactivated. He arranges for one of Cobra's top agents, the Baroness (Sienna Miller) to steal the rockets. She succeeds, but not before Duke identifies her as his ex-girlfriend. After a quick rescue from GI Joe, a secret worldwide military police force, they join up to go after Cobra and recover the weapons. Along the way you meet other Joes, like GI Joe team leader General Hawk (Dennis Quaid), Heavy Duty (Adewale Akinnuoye-Agbaje), Scarlett (Rachel Nichols), and the popular Snake Eyes (Ray Park). On the Cobra side they are lead by Cobra Commander (Joseph Gordon-Levitt), with Destro (Christopher Ecceleston), Zartan (Arnold Vosiloo), Baroness, and Storm Shadow (Snake Eyes counterpart played by Byung Hung-Lee).

The film is one giant set piece after another, from breakneck explosions to another action fight. From a rumble at GI Joe Headquarters in the deserts of Egypt over the missing rockets, to a battle that destroys most of downtown Paris in a winding street fight and car chase, to the final battle at Cobra's Arctic underwater base, there is no shortage of spectacle. What hurts though is that for $175 million dollar budget, the CGI was shoddy at best. It wasn't smooth or flowing and there were plenty of places that practical special effects would have worked just as good or even better, everything is so synthetic you don't really bond to any of the characters. The script is simply a tool to piece the sets together, but to be honest you aren't expecting a great script for a film based on a cartoon. With the light script and the synthetic feel, it doesn't go a long way towards getting you emotionally involved in the characters.

Also I have never seen a franchise so untested, so set up for a sequel more. The entire film is almost a prequel to the formation of Cobra and the battle of GI Joe versus their perpetual enemies. By the films end you know the Joe's will succeed, but Cobra has plenty of tricks left up their sleeves and the movie ends in such a way that a sequel is inevitable. It is a huge opportunity in terms of plot and character development. It's good that you see the formation of some of the Joe's and Cobra agents, but other get pushed aside. I really don't think you needed all the buildup to creating Cobra, just call them a terrorist organization and move on with the plot already. As it stands the sequel will likely turn out to be the movie Joe fans were expecting.

As for the casting, I thought it was one of the better aspects of the film. Despite a few misfires, (Marlon Wayans) everything was pretty good. Ray Park, of Star Wars fame, was born to be Snake Eyes and Quaid as Hawk was a great bit of casting. Overall I liked the choices they had made, I just wish they had better material to choose from. In fact, the best part of the film is Sienna Miller as the Baroness. She brought some tough sexiness to the role and may have been the most fully developed character on the screen during the film. I really enjoyed her in the movie, she had fun with the role and was about the only thing I looked forward to during the course of viewing.

I think you all know what to expect with a movie like GI Joe. You go into it thinking to get a fun popcorn flick that offers a little bit of entertainment. The film is heavy on corn and light on just about everything else. To be honest your best bet is to check it out on video later. With it's huge budget it falls out of the range of a purely fun film and doesn't equal up to the memories I had as a child. For GI Joe purists, they take a lot of liberties with origins and relationships with people so that may be a turn off. If you aren't familiar with GI Joe, what you're getting is a live action cartoon, not necessarily a live action movie. It trends a bit more sci fi than semper fi so tread accordingly. GI Joe: The Rise of Cobra, is a poor film whose only saving grace is the performance of Sienna Miller. Treat yourself to a better film this week, like District 9.

End of Line.
Gerrad!
Posted by Gerrad McConnell at 1:43 PM