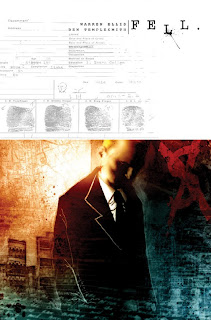 Whenever October rolls around I like to pick a darker comic book for the column, something from the horror or occult genre. This month I chose writer Warren Ellis and artist Ben Templesmith's Fell, from Image Comics. While not necessarily a horror comic, it does deal with a lot of familiar Halloween themes. It's a comic very much about the darkness of humanity and the vileness of real life, though there is a sub-text dealing with implied magic and the power of belief. It's a complex book that shows sometime the truly scariest things in the world are the people around us.


Fell is about a disgraced homicide detective named Richard Fell who is re-assigned to a precinct named Snowtown, a dark city rife with urban decay, separated from the city by a lone bridge, isolating it from the regular world. Snowtown is abnormally cold, a cursed city that is made up of an impoverished amalgamations of several inner cities. Cloaked in mystery, you are never told why the people believe the town is a blight or why working there is considered exile for the police force. The inhabitants have even taking to marking doors and people with a protective marker, hoping that Snowtown will not turn its ill will on one of its own, succumbing to superstition and old beliefs as the world around them has descended into darker times. Still, Fell is assigned to the precinct's minimal police force and is determined to make a difference where many others will not, trying to help the impoverished town improve itself and to protect its inhabitants using his renowned powers of observation and deductive skills.

Snowtown is a dark, dank place, where vileness is an everyday topic that must be dealt with in Fell's struggles to better the community. His sole point of light in this otherwise feral city is Mayko, a bartender who takes Fell under her wing to guide him in the ways of Snowtown and act as a sounding board for the cases he is working on. She also acts as a foil to the bleak desolation that surrounds Fell while in Snowtown. She even goes so far a to brand him with the protective marker that the citizens have been placing around the city to protect him as well. Despiet the early branding and the friction it causes between them, Fell and Mayko grow close to each other.

Fell is a very different sort of comic, designed specifically as an experiment by writer Warren Ellis to produce a line of more affordable comic books in a market where comics are pricing themselves out of business. Fell is a 20 page comic, 16 pages dedicated to story, and 4 pages dedicated to what Ellis called Back Matter. Back Matter was where Ellis would expand on the concepts discussed in the actual comic book itself, answer email questions, and generally experiment with the medium. By pricing this slimline comic book at $1.99, Ellis strived to make the comic worth the price by offering less comic pages than a normal comic, but densely packing each issue with material. Another way he expanded on the book's density was to adapt the nine panel grid system, where each page is based on a nine panel layout. This causes each page to tell more of a story, thus giving the reader a better bargain for their dollar. using this format, each issue, while smaller than a regular comic, contains more story and additional material, making it a better value.

Each issue of Fell was a self contained story, another trick to make each comic more reader friendly and essentially create a better comic value for each issue. The reader was getting a complete story each time they bought a comic, never having to follow several issues in order to understand the entire story. That being said, Ellis did write in several things that rewarded readers who bought each issue, mostly in the form of a recurring character whose mystery deepened with each appearance. She was a short nun, dressed in a habit wearing a Richard Nixon mask and each issue her actions became more and more suspect. If that sounded bizarre it is, but Ellis is a master at taking the abnormal and fitting into the strange landscape he creates, and the nun's appearances in Snowtown simply amplified the darkness that permeated Fell's city Each issue dealt with a different kind of horror, from child abuse to murder, but Ellis always managed to cloud the results with in mystery that was Snowtown. Each issue causes Fell to slip a little further into teh darkness of Snowtown, and draw a little bit closer to the darkness inside himself. Ellis was trying to create value for the reader while crafting a story that changed expectations.

Warren Ellis is one of my favorite writers working today. He caught notice doing work for DC/Wildstorm in the late 90's, working on series like Stormwatch and The Authority and books Desolation Jones (a series I covered a few months back in this column) as well as his seminal runs on comics like Planetary and his signature series Transmetropolitan. Ellis has always been at the forefront of establishing new media and new ideas in comics, embracing the internet culture way before many other writers, always writing with a mind toward the future and about the inequalities and darker ambitions of man. Fell was his attempt to continue these themes in a format that both rewarded the reader and boldly redefined what comics could mean in terms of new publishing formats.

Ellis teamed up with artist Ben Templesmith, who gave Fell a ghostly, acid washed atmosphere, perfectly capturing the darkness and otherworldliness of Snowtown. Templesmith was best known for his work on publisher IDW's 30 Days of Night series with writer Steven Niles. 30 Days of Night was about a group of vampires who take over an Alaskan town that is plunged in darkness for months at a time. He was the perfect artist to bring his grim and gritty look to Fell, illustrating the horror of everyday life while keeping the whole series in a kind of murky sharpness. His art work always suggests far more than it shows, making the reader imply more about Snowtown than may even be there. His art so perfectly accentuates the mood and tone of the series that its hard for me to imagine anyone else drawing this book.

Fell was designed as an ongoing series and actually thrived when it was fist published in 2007, despite many industry pros claims that Ellis' publishing model would fail. In truth, the lower price point and Ellis' dense story telling style, combined with Templesmith's pitch perfect art, made the book an unqualified success. In a rare occurrence for comics, the book actually gained readers as it progressed, causing the first issue to go back to print 5 times. Subsequent issues also saw multiple printings. Ellis and Templesmith stated that they didn't make much money on the project, though for them that wasn't the point. They did turn a profit, but it was more important for them to show what they could do with the format and proving it to the world. It's a strange concept for many people outside of comics, to work on a series out of love for the medium, even though you can make more money on other projects. It's simply the love of the medium that guides you, and the love of creating genre changing books like Fell that motivated them. Most creators would say you don't make comics to get rich, you make comics because you love them.

Unfortunately for fans of the series, the book has been plagued by a series of shipping delays, the last issue coming out nearly two years ago. A combination of Templesmith's other artistic commitments at first led to the initial delays, though since in the end of 2008 much of the problems have been Ellis' fault. After a computer crash led to the loss of Ellis' scripts, including multiple issues of Fell, he spent much of the time catching up his contractually obligated commitments, though he has stated recently that work on a new issue has begun.

Fell is a perfect book for this time of year, dark and creepy, hinting at the darker undertone of the world around us, with just a hint of the fantastic. The book's cutting, murky style is a perfect fit for Ellis' work and his characterization is at the top of his game. The creators manage to ft each 20 page comic with more material than most full size books and it is a real value for your trade dollar. Fell is also a really good gateway book for fans of Ellis, as it borders Ellis quirkier mainstream approach while hinting at the gonzo surrealism of some of Ellis' more subversive and gonzo work, like Transmetropolitan and Black Summer. this is a fine comic, published by two creators making something truly unique in this day and age, a book for the comic book fan. Not something as simple as a mindless rehash or a spin off, but something original and fresh, using an approach unheard of in modern day comics. Check out the first (and sadly sole) trade today, collecting the first 8 issues of the series. Image Comics Fell: Feral City (Volume 1), by Warren Ellis and Ben Templesmith, a book that proves there is nothing quite as frightening as the real world. Happy reading!

End of Line.
Gerrad!
Posted by Gerrad McConnell at 11:28 PM